Embroidered Panel for an Alms Purse of the Late 14th century

Boy its been a loooong time since I last posted in here!
Here is my documentation for my latest project which I have been working on for 75 hours spread out over about a month! Its a project I have wanted to do for a looooong time. I finally decided to sit down and get it done to enter in the Tempore Atlantia at Spring Crown Tourney!

Eventually I will make this into a proper pouch. I am already making up the tassels (all covered in gold!) and I have bought the most delightful silk to make the backing and the lining. Hopefully I will have this done by Ruby Joust! 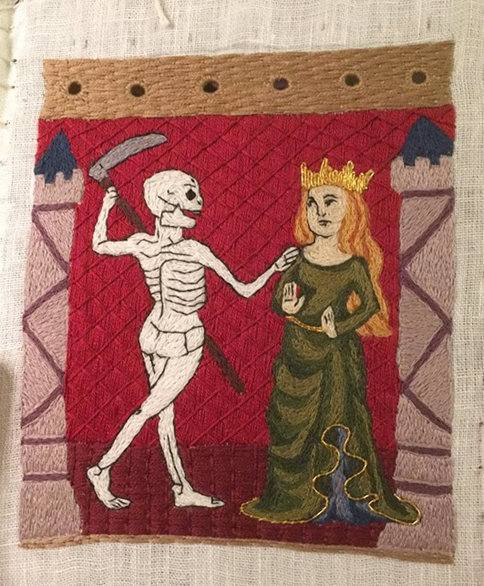 Alms purses (also known in French as aumonières) were a type of decorative pouch worn by both men and women throughout the fourteenth century. Elaborate pouches and girdles and other accessories to be worn on the body were common gifts to be exchanged between lovers (Camille 53). It makes sense that a popular scene to decorate these purses would be scenes of lovers. There are examples stretching back to the twelfth century, though the surviving examples seem to be most commonly from the fourteenth century. There are two styles that are common: a sort of trapezoid shape with a flap to cover the opening and a simple square or rectangular drawstring pouch. The rectangular pouch, as shown in Figure 1, is what I chose to recreate. This style of pouch generally features a pair of central figures and minimal background details along with a band at top for the drawstring and many tassels around the sides and bottom. 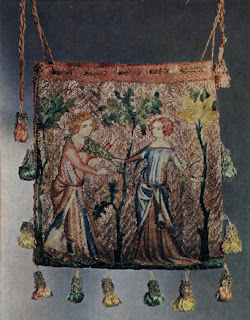 Between the near-constant warfare, famine, and the Black Death, the late fourteenth century was not a pleasant place to be. The Danse Macabre was a theme in artwork that grew out of this omnipresence of death, depicting skeletons dancing with people from every walk of life from a child to a king to the Pope. It was meant to remind people to repent for their sins and not to live wickedly as death was around every corner and could come for someone at any time, any age, and any station in life (see the article on the Three Living and the Three Dead).

My piece is an amalgamation of these two artistic conventions. My embroidered panel has two figures and minimal background elements (like the above alms purse) but instead of a pair of lovers, I chose to depict a Danse Macabre scene featuring Death and the maiden. The scene is a bit autobiographical as I depicted the maiden as myself. I embroidered long flowing hair, a coronet, and a green kirtle to symbolize youth and to provide greater contrast with the stark white figure of Death. The style I used would date the piece to the very end of the 14th century; between 1380 and 1400.

The extant pouch as seen in Figure 1, which dates to the 1340s, is embroidered in silk and gold threads on a linen ground. It measures approximately 6.25 inches by 5.5 inches, being slightly taller than it is wide. My piece ended up being 6.25 inches by 5.25 inches due to the size of my frame and is worked in DMC cotton thread with metal-wrapped thread on a linen ground. I made sure to choose colors that are historically plausible and could have been dyed with materials from the period. I based the color scheme on manuscripts and tapestries. Note the rich red background seen in Figure 2 depicting the skeleton on horseback. I have worked with silk floss in the past and it does perform differently than cotton, but I chose the DMC thread for economy and durability (I didn’t want to be afraid to actually use this pouch in my SCA life). The linen is from my stash and is a little more loosely woven than the linen used in period. Again, the departure was for economy as I already had this linen.

The figures and the vegetation on the extant pouch (Figure 1) are worked in split stitch while the background consists of surface-couched gold work. More surface couching and hand bound eyelets make up a band at the top used to hold the drawstrings. I used the same stitches: split stitch for the figures and the towers and surface couching for the drawstring panel and the gold threads. Since I did not have as much gold on hand, I used a background fill technique similar to that shown in the pouch in Figure 4 in which threads are laid parallel to each other across the background and then couched down by a grid of crossing parallel stitches couched in a diamond pattern. Another reason I chose this style of background fill is that it would put my pouch more firmly in the late 14th century time block that I was aiming for.

Figure 4: Embroidered purse with a dog, 1398, Stadtmuseum of Koln. The background fill stitch used is similar to the one I chose for my piece.

The Process of Stitching the Pouch

The steps I took to complete this panel began with designing the cartoon or image from which I would work. I gathered images of skeletons and women in manuscript illustrations and extant embroidery of the period and eventually designed something unique. Next, I hemmed my linen and stretched it on the frame that would hold it taut while I worked on it. 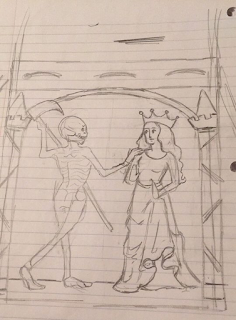 Then I sketched the design onto it lightly in pencil. In period, the design might have been transferred by the prick and pounce method in which the design was drawn on paper and then pricked with holes, and finally dusted with a fine dark powder such as charcoal, colored chalk, or graphite to transfer the cartoon. In the 2016 video released by the Victoria and Albert Museum depicting an artist working a similar style of embroidery, she then paints over the design in ink since the charcoal may rub off too easily and the entire ground would be covered in embroidery anyway.

The order in which I completed the embroidery was: maiden, skeleton, towers, red background, brown background, tawny drawstring band, the eyelets, and lastly the gold couching. I chose to put gold on the coronet and belt as fill because I had never worked with it before and was curious as to how it would work. As I looked more closely at the extant, I noticed that there is also gold couched along the hem of the woman’s gown. I decided that more gold is always a great idea and applied it to the hem of the gown as well. 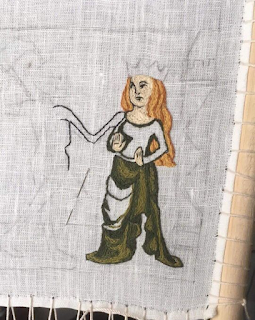 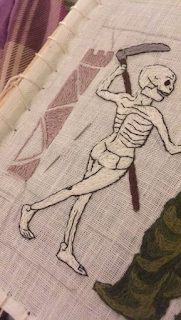 This piece will eventually become the front of a small pouch. The extant example consisted of two panels of embroidery, front and back, and a lining. The cords used on the extant seem to be simple twisted cords. Others are done as a simple fingerloop braid. The tassels are also done in silk and have some sort of gilt braid over them, which I will have to look at more closely before I move on to that part of the process. 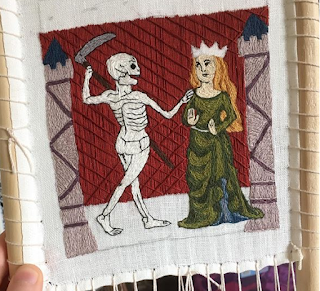 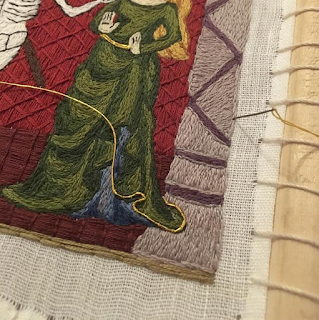